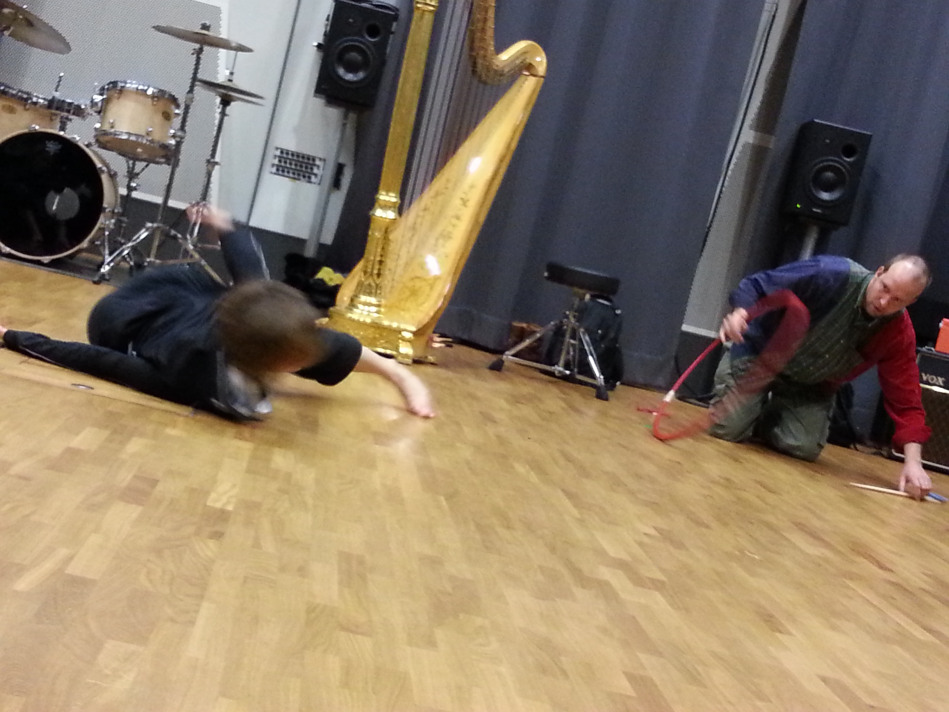 Hello. How are you? – starts the letter from the envelope which comes along with a ticket for The Helsinki Meeting Point Extended Edition 2012 – Festival for Free Dance and Music Improvisation. This letter sounds very friendly. It tells that the performers and the light designer had two days to work together. They are people interested in improvisation in its many forms. The letter asks what brought you here? It offers to use an empty paper enclosed in the envelope in many different ways such as giving feedback to the festival, drawing, making a paper plane.

I decide to keep the paper empty. I do not know why. I do not need to think about it. I know this is a right place not to think about the things in advance. The decision to keep the paper empty was just important enough at the moment I was reading the letter. I somehow think that those people interested in improvisation in its many forms could catch my decision and respond to it. They would not be able to appreciate or judge it. They know there is simply no time to appreciate and judge things happening here and now as there might be a danger to miss here and now, let it slip and never catch it up again. Appreciation and judgment come later, don’t they?

So it is happening here and now, the decisions are made here and now. Improvisation as a performance: four dancers and four musicians in the black box. The evening consists of two parts. On the stage on the right side are a bare feet trumpet player and a pianist in wool socks. Right opposite to them – a harp player hardly seen behind her large instrument and a musician sitting at the kind of flea market table full of various stuff. Obviously all four frame the space for dance. The dancers appear from the sides. The movement takes the framed space on the stage. The music and sounds gradually fulfill the space all around. The strong presence of the dancers in their bodies make you feel grounded in your viewer’s chair. The musicians’ constant focus on the dance keeps your attention in that framed space for dance.

Space is given, taken, shared and gained among the performers. It is given, taken, shared and gained between dance and music. Something begins, develops and ends. Each ending is a new beginning of something else. And it develops and ends again. Again and again. The music is sometimes more about sounds than music. The dancers get rarely out of the space framed by musicians’ bodies on the stage. They do not really get out of the space framed by their own bodies. They are always there being busy with listening what is happening inside and what is happening outside. It seems that there is too much space for listening as it leaves too little space for courage, humor and spontaneity. It stays relaxed in a strict way.

The flea market table – musician produces sounds by rubbing the chair, he was probably sitting on before, against the floor. The trumpet player walks around with his instrument. He finds himself seated on one of the chairs and while playing the trumpet his chair is carried by the dancers through the space with him sitting and walking on half-bent legs. The harp is sometimes beautiful in its common line and mostly not recognizable at all. The dancers are generous with giving space for each other’s solos. The music always comes along. It is rarely greedy for own solos apart from dance. In the end of the evening’s first part the pianist shifts his focus from the happening on the stage to his instrument and gets carried away with his music/melody/the sounds. I follow his solitary journey not caring about the last destination.

The Helsinki Meeting Point Extended Edition 2012 – Festival for Free Dance and Music Improvisation was happening on December, 7th and 8th, in Tanssiteatteri Hurjaruuth. On the second day of the festival there was an open discussion about improvisation with the festival organizers, the artists and the audience. The artists shared their experiences about working with improvisation on the performance level. The dance artists based in Helsinki noted an obvious positive change in the attitudes towards improvisation but mainly as a tool to create choreography and not as much as an art to perform. Improvisation has become an essential part in any dance and music curriculum in educative institutions in Finland. But there is still in the air the joke about improvising on the stage as a kind of lazy way to perform.

Lily Kiara, a dance-artist based in Amsterdam, was telling about strong improvisation community in Amsterdam, particularly about the place Bimhuis, where improvisation performances are going on weekly with free entrance for anybody who is interested in. The lack of such place in Helsinki which would bring different people keen on improvisation together is a big disadvantage for the development of the field. And the artists based in Helsinki noted a certain disconnection among improvisation practitioners here. At this point Helsinki Meeting Point becomes an important link for the field, although the festival organizer Giorgio Convertito admitted the lack of strategies in the festival development and in the field in general. Therefore it is planned to organize a discussion on a particular topic of creating the strategies of developing and strengthening the community of improvisation practitioners in Helsinki. The discussion will take place in January 2013.