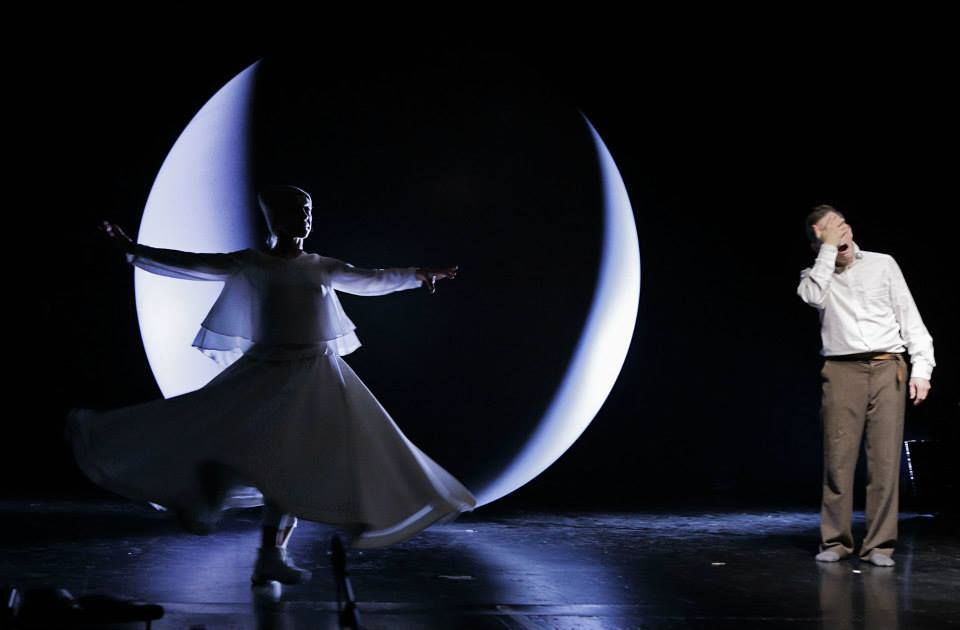 In a continious whirling she shows up on the stage once the curtains open up and keeps on whirling until the very end of 45-minute long performance. No change of direction…no change of body position… no change of stepping… no change of speed…No concerns that the dancer will pass out in her long-lasting whirling. She must have practiced it a lot, and I know she did… It is simply a whirling after all, but it leaves a similar impression while watching a good ballet performance: lightness, easiness and gracefulness.

I doubt that my excitement from Kristiina Helin’s staging would have been so intense if it had happened as a single event. Having come to the concert as a dance reviewer I had an intention to get concentrated on the elements of theatrical staging, that would give me a ground for my writing, such as movement, choreography, dramaturgy, relationship between music and dance. But the two first parts of the concert, preceding Solder’s Tale, were pure orchestra playing but they seemed to open and tune me up (Not warm up!) for the viewer’s dialog with Solder’s Tale.

Do all dancers rarely come to orchestra’s concerts simply because they always go to see dance performances?

Do all dance-makers perceve music only in relation to dance and/or movement?

Would the connoisseur of orchestral music see such viewer’s perception as too lop-sided and narrow?

No need to confess here the power of live orchestral sound on the stage. And Avanti, conducted by renowened Esa-Pekka Salonen, played more than splendidly.

Vaporized Tivoli, full of dramatic narrative power, might become an inspiration for ballet choreographers. Each musical theme in Hillborg’s composition was appealing to a certain movement impulse in me and was creating vivid dance compositions flashing across my mind.

Pietilä’s Graffitti Play on the contrary was diffuse and multi-layered without possibility to stick to and follow any direction in graffiti patterns. Even the saxophone solo was not promising any clear theme alternations, as if arriving from ellipsis and fading into ellipsis again, dodging the orchestra’s concord.

…I’d rather stay still and listened…

And then there came Solder’s Tale. Consistant in timing, recognising dots and commas in dramatic development, respecting the space for each of the performance’s components.

Kristiina Helin’s direction suceeded in putting all the components into harmonious co-existing on the stage: the musicians with the conductor, alternated with the movies’s sound distracts and electronic soundworld; the continious whirling spirit and the nonverbal restlessness of Tero Nauha’s solder’s character; a huge grey balloon in the middle of the stage; a culminating violin solo of Pekka Kuusisto preacher’s character; and a ”Big Bang” in the end with a huge balloon bursting.

Any contemporary interpretation of the classics is a double responsibility for a daring director. Just because it is classics: it has already overcome through thousands evaluations and got its place deeply rooted in the field of mankind creation.

Sravinsky composed Solder’s Tale in the end of World War I, still today almost 100 years later nobody would doubt that the issue of war is still topical. And it seems that Stravinsky’s genius knew that…

I appreciated Helin’s interpretation of Solder’s Tale as a very contemporary work in the context of today’s performing art: body language instead of words, sound world instead of melody, presence instead of acting. And exactly that created a link for me to the remote Stavinsky’s genius and the eternal truths that classics talk about.