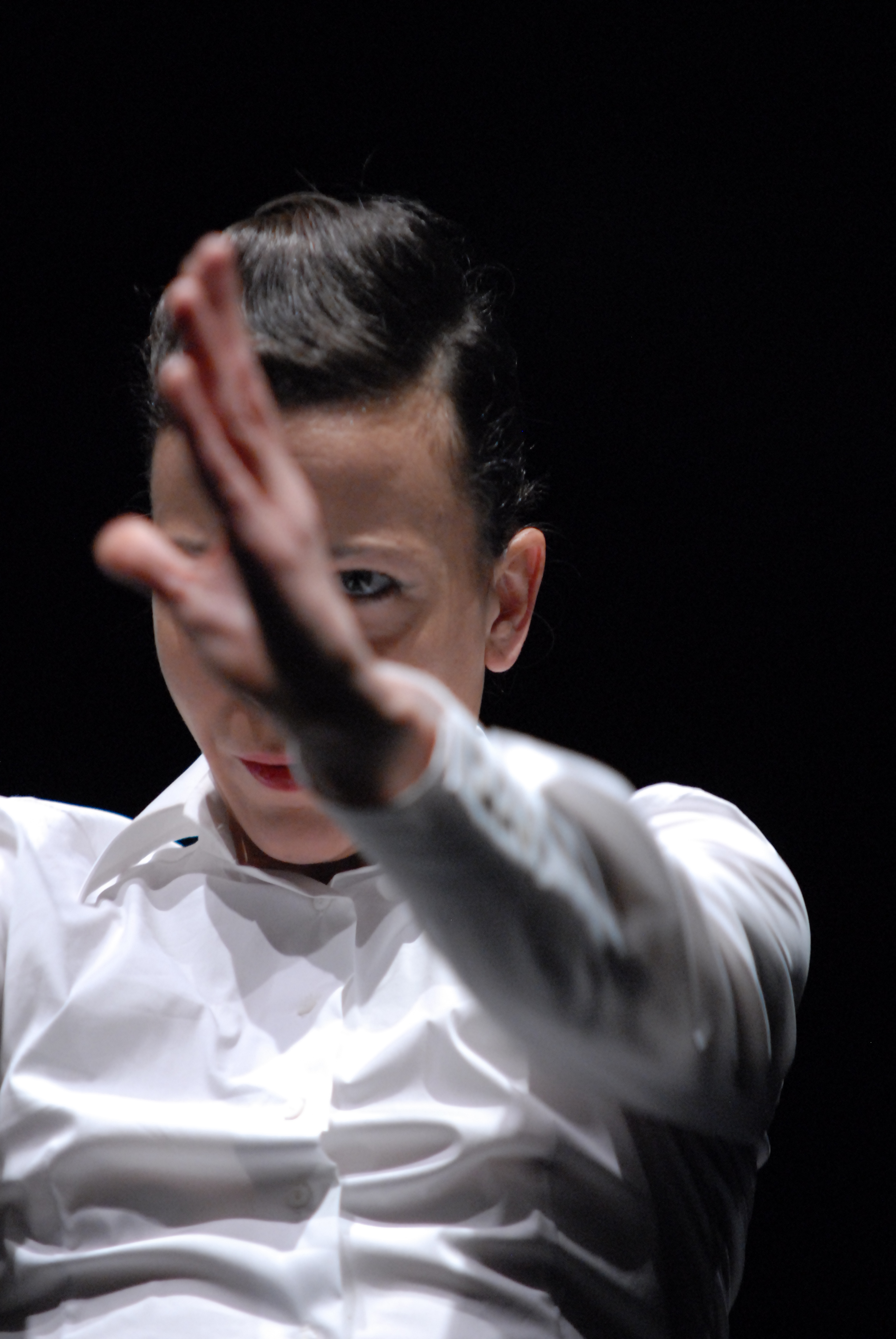 The students of International Performance Research (MA) write about their experiences during Moving in November festival for Liikekieli.com. This time Olivia Furber reviews Cheap Lecture and The Cow Piece by Jonathan Burrows and Matteo Fargion as well as It’s going to get worse and worse and worse, my friend by Lisbeth Gruwez and Voetvolk.

The performance lecture is a form that has been played with more and more in recent years. It is a form I particularly enjoy, welcoming any attempt to subvert the classroom environment and transgress the rigidity of the traditional presentation format. Thus, it was with particular enthusiasm that I attended Jonathan Burrows’ and Matteo Fargion’s Cheap Lecture and the Cow Piece and it did not disappoint.

The performance is divided into two parts, as the title suggests. First up was the Cheap Lecture, a rhythmic spoken performance set to music. Burrows and Fargion juggle and play with words to produce a tirade about time, audiences and dance, amongst other things. Some subjects are intelligible, others are not. Their delivery is metronomic, timed perfectly against each other, the music and the hilarious power point slides being projected behind them. Their dead-pan delivery elevated the humour of their nonsensical tirade to new heights.

The second part of the performance, The Cow Piece, took on a different form. It combined movement, text, sounds, music and a variety of comical objects. The star objects were a herd of plastic cows, divided between Burrows and Fargion. Play with the plastic cows gave the most concrete structure to the performance. Whilst Burrows and Fargion intermittently departed from the cows to play a variety of musical instruments, play with other props such as a beer can, and perform repetitive movements, they always returned back to their beloved cows. The palpable enjoyment on their faces made me wish that playing with plastic farm animals remained socially acceptable even when one has entered adulthood.

The fast pace of the performance and frequent change of topics made it hard at times to understand what themes the performers, if any, were trying to address. Nonetheless, this was relatively unimportant as the imagination and comic timing of the piece was spot on.

The irony and ridiculousness of the piece was very characteristic of British humour, Monty Python-esque even, making me feel a touch of nostalgia. This did not restrict the enjoyment of the piece for those not from the UK or unfamiliar with British humour as the piece could be enjoyed on so many different levels.

I was struck by the humility and generosity of Fargion and Burrow’s performance. They offered up what they had made for us, purely for the service of enjoyment, and it was evidently appreciated by the audience.

The performance is a danced expression of the showmanship of tele-evangelism, an immensely popular form of televised proselytism born in the United States. I will not attempt to be neutral here, it is a particularly repugnant, often exploitative form of pseudo-brainwashing that I have a strong distaste for.

Fortunately, Lisbeth Gruwez did justice to tele-evangelism, exposing through layers of sound, spoken word and movement the stage-management behind tele-evangelist’s performance.

Her movements take us through a tour of what seems like the preparation for, and the subsequent performance of, a televised sermon. The composition of the sound is highly intelligent. It is punctuated by the words of a tele-evangelist and Gruwez’s moves chime in perfect time with the recitation of the words. Her astute timing gives the impression that she is composing the words, manipulating them with her own body. She seems captivated and delighted by her own textual mastery, suggestive of the realization of the evangelical preacher of the power that he wields.

Once Gruwez has demonstrated her mastery over words she starts to create language. She acts as the composer. First she establishes a vocabulary of movement. Each word has a signifying movement. Gradually, she starts to build sentences. She plays with words to create sensical and non-sensical sentences. The sentence which packs the most punch is that of the title, the apocalyptic and prophetic words, ‘It’s going to get worse and worse and worse, my friend’.

She plays with words like a toreador, tempting and confusing us with them. Her back and forth with language is heavily reminiscent of the tele-evangelist style in which audiences are wound up by a preacher and slowly but surely whipped into a frenzy.

The performance culminates with an intense period of jumping and trembling movements. Gruwez appears as if she is in a divine ecstasy, brought about by the manufactured hype she created through movement and words previously.

I felt myself disturbed by the piece, in the positive sense. It summed up both eloquently and terrifyingly the power of the spoken word and the illusion that can be created through careful stage-management and choreography. I take this piece as a powerful and much needed critique of the misuse of charisma and text in the name of religion, so often seen amongst tele-evangelists.