I met Ahifon Daniel in his dance classes in Seoul, South Korea last fall. He and his partner run a dance company named TAGG where they teach and dance Afropop and Afro-fusion dance based on traditional steps. While joining his dance classes, we sometimes exchanged greeting before or after class and we talked about Beninese culture and food. We also connected because we both spoke French.

The classes were an interesting meeting place of people of different backgrounds and cultures. This is also what drew me to the class as I had seen some videos from the classes before joining. Further, the classes were laidback and “vibing” was emphasised, where Ahifon wanted us students to feel the music and bring our own style and vibe to it. I appreciated this a lot and really had a great time going to the dance classes. Plus, it was also a great chance to hear the latest afrobeats hits.

I then wanted to interview Daniel for Liikekieli to bring a perspective of a dancer who teaches and dances in another culture. We were able to have the interview over mail because of our schedules after I had already moved back to Finland. With the interview, I wanted to know more about why Ahifon Daniel dances, what inspires him, what it is like teaching and dancing in South Korea has been like. The original interview was in French.

Ahifon Soundea Daniel is a Beninese-Ivorian dancer, choreographer and artistic director of the dance company TAGG based in South Korea. He teaches urban African dance and tradition Beninese dance. He says that he is rather a “voyageur” or a traveller between the urban and tradition dance. He defines his dance as a “meeting” of traditional West African dances and urban African dances, which he calls ‘Afropop’ dance (popular African dance). Through this, Ahifon is able to break down the borders between the different cultures and promote the mixing of various African cultures.

Ahifon was born to dance and nothing else. For him, dance makes him happy, it makes him confident about himself. Dance is also a way for him to meet other great people who through dance, have become a part of his life. Like his wife. He lives for his art, he communicates with, he is informed with it, he raises awareness with it. Everything that constitutes life is a source of inspiration to him, both the spiritual and the physical.

Teaching in Korea has had it difficulties, especially when one meets new people who do not know about his culture. He says that with passion one can make it. Another difficulty of dancing and living in another country is the language barrier but with dance, he is more in the “physical language” hence he has managed to communicate with other dancers.

Ahifon has been able to deal with the difficulties of teaching in a foreign country through the passion he has for his job. The love he gives to his job also comes back to him which has helped him through these difficulties. These aspects of dance motivate him even more.

He finds it that in Korea he teaches more compared to Benin and Ivory Coast. In his country, people are not willing to pay for lessons thus, dance is more about performances and events rather than teaching dance.

For Ahifon, the dance community in Korea in general is a community that is thirsty for learning so they put the resources in dancing. In addition, their education system that is already well established also helps garner this learning. But this is not yet the case with African dances, says Ahifon, who believes that because learning dance is something new there, they are reluctant to invest in it.

Finally, Ahifon hopes to see the future of dance in South Korea where many more young people take an interest in African dances, as they do for other dances. He would love to see this community grow and influence several other areas of the Korean show business. 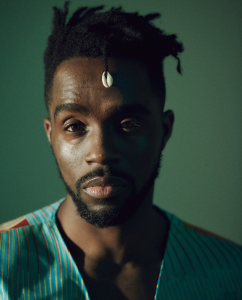 “The bigger the community, the more our art grows.”

I want to thank Ahifon for his time and great teaching back in South Korea.

You can check what he does on his social media.

Emonie Ayiwe is a Finnish-Nigerian Luxembourger who recently completed her studies in Intercultural Encounters. She currently works as a research assistant at Democratic Society, working on projects on participatory processes and citizen engagement. She has a keen interest in hip hop studies, especially breaking, as she has always been interested in dancing. She got into the groove of streetdance and dancehall at university. Later on in her studies, she joined a breaking class and became interested in the communal aspect of the dance. This motivated her to do her bachelor’s thesis on breaking which explored what breaking means to the dancers. She also started to watch dance battles and saw that there were many Korean b-boys and b-girls performing in them. This piqued her interest, and she wrote her master’s thesis on the expressions of identity in South Korean b-boys. She hopes to further study breaking in other contexts and explore how it can be beneficial to the whole community, not just the dancers.