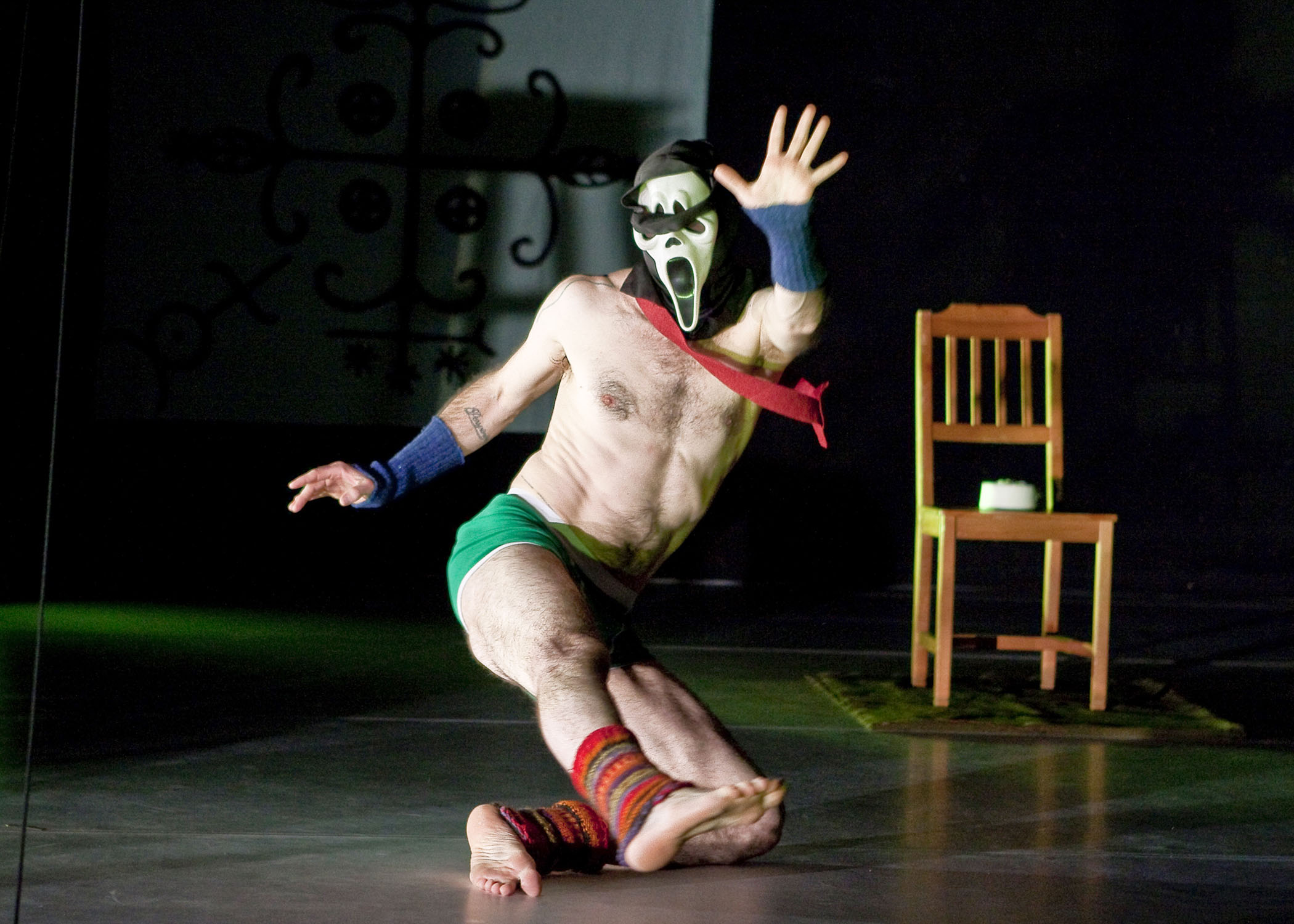 It is always a nice feeling to be warmly welcomed to somebody’s home. I came to see Keith Hennessy’s Crotch but rather visited it. I visited Hennessy’s artistic world with all the queer and failure, his song, dance, lecture, talking to the dead. It feels like I visited his home after all. As a host Hennessy has shown very warm hospitality to his performance referring to the images and actions of artist Joseph Beuys. His visitors stayed entertained with respect and were treated nicely as if he was following the basic rules of etiquette of having guests.

It all starts in the foyer of the performance venue. He walks around the people with a tray full of pieces of milk and dark Fazer chocolate and nicely offers it to his visitors. He gets on the cupboard high enough to be seen and welcomes his guests to the show. He reassures that it is not necessary to know the figure of Joseph Beuys to appreciate and experience Crotch. He admits that there is installation on the stage and invites his guests to walk around to have a look on it before rushing to take a seat in the audience. He reads a letter with unfinished ending of some woman left by her husband.

The stage is full of objects and subjects obviously related to Joseph Beuys’s art and the whole space looks like an open sale of the belongings of the artist for the admirers and connoisseurs of his art. Hennessy’s visitors freely walk around, look, read and touch the things. Hennessy himself in a black stocking on his head whips a hanging white teddy bear with a black cloth covering its head.

Guests gradually take their seats in the audience space. Hennessy asks for a help and hands out three strings which are meant to pull up a big plastic board in the middle of the stage. Work together, – he insists. Plastic board becomes a platform for a brain storming of a brief overview on the art history and art philosophy in a chain of Plato–Hegel–Butler all the way to nowadays. But host does not bore his guests with such a lecture: he lists enormous amount of significant names and their contribution to the art history with ironic appreciation, he plays with the words and the phonetics of the languages, he interacts with the board the way that the string-holders do not rest, he asks to watch the time and limits the lecture within 7 minutes, he fails to be on time and asks to add two more.

”Contemporary dance is either a wig or a mask nowadays”, – with such words he performs a solo-dance in a ghostface mask, in his underwear and with such dance attributes as leg warmers and forearm protectors. Those guests who recognize the common movement patterns of contemporary dance laugh at such a parody.

Fun changes into queer melancholy and sadness when he knocks two beams together crosswise. He loads the cross on his head and walks around with it to the melancholic song with a suffering face.

He puts a chair in the middle and sits naked with legs wide open. He models a wax hill between his legs high enough to cover his genitals. He invites his visitors to come closer to see the elaborate work he is going to do. He literally sews himself together with three of his guests by stitching the garments of the guests and his own skin with a long red thread. He spangles himself and puts a denture with big troll’s front teeth into his mouth. Nirvana’s Something in the Way plays in the background all the time. Kurt Cobain’s last lyrics come to an end and get taken up by troll-like character.

He looks at people around singing and does not look like host anymore. He cuts the thread and leaves the space still singing.

Host does not say goodbye to his guests…And I leave his Crotch, his performance referring to the images and actions of artist Joseph Beuys, his artistic world with all the queer and failure, his song, dance, lecture, talking to the dead, his home after all, singing Something in the Way like many others around me.

Crotch by Keith Hennessy (2008), performed in Side Step Festival, Helsinki 2013