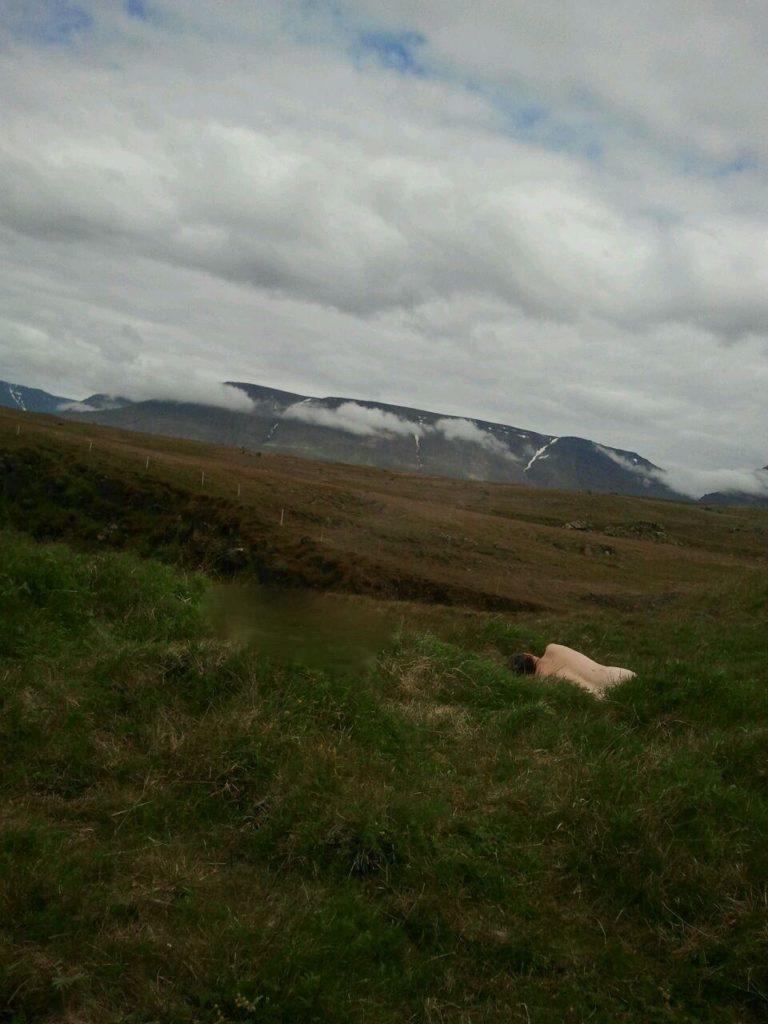 Feet meet granite, I notice a vein of white quartz as ants scurrying over. A breeze swirls through the gorge orchestrating leafy sounds of flap and shake pulsating through like breath. My diaphragm releases as I inhale the familiar sweet smell of dry pine. Swallows zip and scoot through infinite blue as a dragonfly meanders close by. I feel the sensation of weight in my right arm, aware of the carpal bones in my wrist as fingers begin to play with the moving air. My head drops to the side and following the weight l spiral to the earth, rock meets whole bone body. Resting in stillness, I notice details — the miniature forest in the moss and lichen, the shape and texture of my scapular; nuances of dips and grooves meeting the surface of the rock as I breathe. The rocky protuberance of my left greater trochanter (femur) meets itself with the architecture of the rock; each informing the other. This place is as much a part of me as I am part of it.

The above maps my experience of moving in a site close to where I live. Our relationship has developed over five years, and like any relationship is at times familiar and known, and at times changeable and unknown. Meeting in all kind of weather through the seasons has provided many opportunities for meeting aspects of my own seasons and weather. I move in other sites here; swamp, pond, and forest, but this one is the most frequented. I have slept here, watched meteor showers, witnessed local inhabitants of moose, badger, squirrel, fox, deer and woodpecker, just to name a few with whom I share this place. I have also moved with other dancers on this site, although mostly I work alone.

My praxis is defined as non-stylised environmental movement and is somatically based. Rather than following a style, technique or prescribed movement, I follow what emerges in awareness through sensation, feeling, thought or association in the momentary manifestation of micro or macro movement meeting myself and environment concurrently. Moving usually lasts for an hour; although in winter it can be shorter. I often close sessions by writing or drawing, not in a descriptive way but following something emergent as an expression. Sometimes it is not clear what that is, but, as unknowing is as much a part of the process as knowing, finding meaning is not always necessary and it can be left to the mere action of doing. 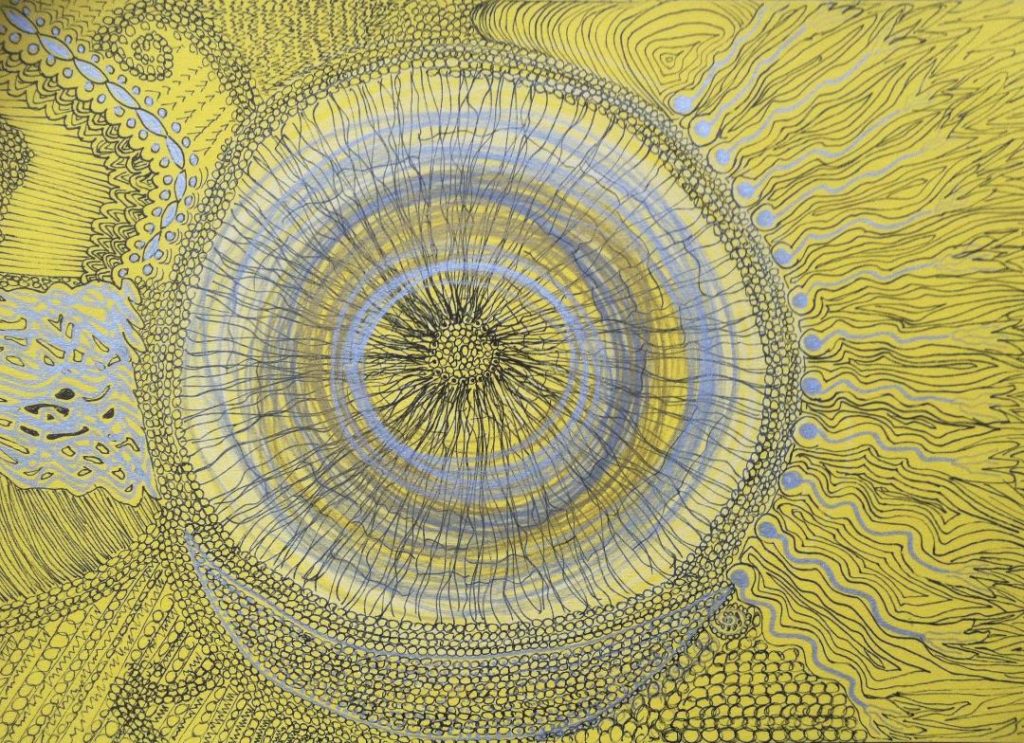 My practice has not always been constant, but my return to it has. I return to it because I need to be with other forms of life. I need to experience myself beyond cultural or social definitions. Moving in natural environments affirms my living organism; my senses shift, differentiation occurs, my perception widens. I sense different dimensionalities of shape, texture, and form which reshapes responses and kinesthetic awareness. Journeying through moment to moment reveals associations and elements from my autobiography which can be transformative, concurrently also transforming the environment in a living, moving exchange. The intention could be described as ‘interbeing’, or ‘biocentric equality’ (Reeve 2011); recognising the livingness of all things equally.

My first contact with environmental movement occurred in 2002 in a nature reserve on the North East coast of Australia with Helen Poynor, who was running a three day Walk of Life -workshop. While moving in relationship to the elements of sea, wind, sky, sun, stone, tree and sand I experienced the elemental in myself; unfiltered, raw and wild. This expression reconstituted my sense of self, place and space defining a life interest in moving with nature. In 2012, and 2014 I completed Helen Poynor’s Walk of Life -training on the Jurassic Coast in West Dorset/East Devon in the UK.

My artistic interactions happen through various interfaces in choreography, teaching, mentoring and producing dance events. My practice of non-stylised environmental movement influences and contributes to my work, significantly in shaping perception and alternative modes of communication. This directly informs my work with diverse demographics of people when many aspects of physicality and thinking can be present. This supports accessible expressions of humanness including every body in the community.

Contextually my praxis of non-stylised environmental movement foster’s interests in movement research, particularly in regards to emergent states that remain ineffable during the process of moving, emphasising my personal desire to find language to describe the indescribable (Adler 2007). The symbiotic relationship I have with the environment defines my interest in researching the potency of this relationship, in terms of understanding resources that could provide insight into social and environmental issues for the benefit of all forms of life through artistic practice.

Linking environmental aspects to movement recontextualizes humanness within a great matrix of association, shifting ally to the inherent power of nature to realign and restore our experience within other parameters of reality. Nature can reveal metaphors for living that support major life changes, such as illness, ageing or dying, offering alternative paradigms outside more socially or medically accepted models. This can be significantly relevant to us a species in these present times. The following illustrates a significant personal soma memory from twenty-seven years ago:

We enter an old growth forest on Vancouver Island, descending down, and down, via wooden steps, it feels like entering the bowels of the earth. Eventually, we reach the bottom. A walkway a meter above the forest floor winds its way through the old trees like a snake. The canopy far above disburses small rays of sunlight and sky, barely reaching where we are standing. I sense I am somewhere sacred, the silence is palpable, the atmosphere timelessness. I fall silent, my pace slows, aware of each step, I feel privileged to be there. The visibility of life and death is everywhere — the young growing from the old, decay giving life — a natural order of things revealing itself as we move through.

This experience proposes the poignancy of the metaphoric aspect of nature woven so intrinsically into the fabric of older cultures. Perhaps nature can be defined as a process of life from which we are never separate but have become unaware, much like we have become unaware of our own bodies. Moving the living organism of body within the living organism of the earth affirms the interconnectedness of all life to life. Acknowledging this through moving as part of the environment pays homage to the ever-changing patterns of life of which we are a part, and a direct action for all we take for granted.

As someone who has travelled frequently and lived in many places, to stay and be in a place over a long period of time in a moving exchange evokes a reality which feels imperative personally and collectively at this time — a sense of place — unfolding in a process — of living life — together.

Sally Davison is a dance artist and choreographer whose work deeply attends to the existential qualities of the moving body and life more broadly, focusing in particular on aspects of inclusion, accessibility and equality. Davison has been living in a forest near the shores of a lake in Espoo for over five years and is currently studying an MA in Dance and Somatic Wellbeing at Uclan, UK as well as working with DanceAbility Finland and Kaaos Company.

Drawing: Sally Davison’s journal, 2017. Drawn after moving with awareness of form and function of bone.

For more about the work of Helen Poynor: www.walkoflife.co.uk