Working conditions/work peace and sensibility are important themes for me in artistic work, that is why it felt easy to suggest writing about it. Working conditions are those concrete elements and places, human and non-human conditions which surround my work. Why would environment(s) need to be separate from my work? In this article I tackle these topics more on the level of thinking and creativity and not much by giving practical or personal examples. I believe that thinking and articulating thoughts is a big part of artistic work, as well as equally manifesting them is. Maybe this can inspire you to discover ways of how to perceive and pay attention to these matters in different ways and how they could be part of working and manifesting in relation to environments, working groups, audiences, performances and processes. As the support for the text I have used references which are of interest for me at the moment.

Oxford English Dictionary defines sensibility as following: “The state of property of being capable of sensation, or of perceiving sensations of particular type; the degree to which something or someone is capable of sensation”. In other words sensibility is a skill to sense and to perceive specific sensations and the depth or amount which someone is capable of doing it. Elizabeth Grosz writes in her book Chaos, territory, art that sensation is a link between the subject and object, something which both of them share but which doesn’t belong to either one only. It is a thing equally between the sensing and the sensed. Grosz in her writing says that sensation also belongs to the environment and so also to nonhuman. For me this kind of sensibility brings a feeling of stability, scope and support.

Sensibility could be thought to be, through sensation and the sharpness of the perception of it, also vulnerable because it goes deeper than the everyday straightforward and clear being through actions and its assumed expressions, meanings and interpretations. For me sensibility is curiosity and interest to sense wider. In the book Power of Vulnerability the word vulnerability is said to come from the Latin word vulnus which means wound and the ability of being wounded and to hurt or suffer. In this context and in this article when speaking about vulnerability I use the word skill, and not the word identity. By doing that I’m not aiming to say that sensibility or vulnerability could not be joined to identity. As bodily, affective and social beings we all have the ability to become vulnerable to each other as well as to conditions of inequality, discrimination, exploitation, or violence, as well as to the natural environment. Vulnerability challenges the liberal notions of the individual subject as autonomous, independent and self-sufficient who is not touched by the capacity of being vulnerable. Judith Butler defines vulnerability as an existential condition, a universal and shared human-animal ontology of us all. By Koivunen, Kyrölä and Ryberg in feminist theories vulnerability is also problematic concept as it is often related to dependence, weakness and victimisation, invoking a problematic imaginary. Feminist scholars have sought to redefine vulnerability in order to dissociate it from passivity and lack of agency. They have redefined autonomy as a critique of liberal individualism and modes of rationality. Vulnerability and resistance have been focused as interlinked. Erinn Gilson argues that vulnerability as a concept is of special value because of how it captures and expresses the complexities, tensions and ambiguities of experiences of gender, sexuality and power in contemporary life. From my own experience sensibility asks for experiencing and allowing vulnerability on some levels. Some personal aspects are present when new ideas emerge and get created, which makes that as a process also vulnerable. Often when working I aim to create the right distance and space between myself, the work and the topic.

Developing and researching sensibility as a skill is part of my artistic work and practise. It can be done and practised in many ways. Sensibility as a skill is also bodily phenomena which makes it interesting choreographically. Sensibility interests me as a dynamic, richly qualitative and energetically complex state. It is interesting to observe how the level and quality of sensibility changes in different contexts and different places. How to increase sensibility in places where it is usually low and vice versa? It is also interesting to see how far your own sensibility stretches and when it reaches its limit. I’m learning to perceive and observe qualities and ways of sensibility also in other humans and nonhuman beings around me. Different nonhuman entities and beings have differing skills and levels of sensing and sensibility which is interesting to pay attention to. In this sense sensibility is broadening imagination and creates new possibilities to experience, be and sense. It opens up poetic potential to combine, understand and experience differently also in surprising and new ways. Sometimes sensibility can be dependent on perspective, I believe it can be found almost anywhere and also from things and entities where it might be thought that it wouldn’t normally fit in or be part of. Part of the skill of sensibility is to find and seek it from different places where it could be assumed that it can’t be in.

The definition of peace for Baruch Spinoza is as follows: “peace is not mere absence of war, but is a virtue that springs from force of character”. In other words peace is something which doesn’t require absence of conflicts or ‘war’ but is felt in person/entity themselves or from the force of its character. What could force of character mean in this context and in relation to artistic work, working conditions or work peace? For me sensibility is a force in artistic work. Force could also be for example an ability to stay with problematic questions and face them through art making. Sometimes problematic can be found by looking at the issue broader or through different contexts. I believe that sensibility can create good working conditions and work peace, that there is space to research through sensibility and to settle into the space that sensibility creates when working. In order for this to be made happen some other skills might need to be developed which might be related to this force of character that Spinoza speaks about. One of these skills for me is the ability to cut and frame/limit as well as ability to work in and between different temporalities. I often feel like I melt into the time. It is interesting that these are also very choreographic tools. These skills could be called enablers of sensibility. Sensibility can feel problematic and challenging but for the art making it is only good and inspiring. Through sensibility I can trust my sensing and perceiving and through that independently think what kind of work is meaningful. This skill I find especially important. Maybe the skill for sensibility could also be a force of character at least in the art making?

Interest towards sensibility and work conditions/environments has led me to work parallel with writing and choreography. Writing has been for a while for me a way to process body and environment and world through receiving, sensing, feeling, attention and perception. For me writing is a link between the body, environment and the information in them. Writer Gertrude Stein became interested in attention and information overload and her typical repetitive style of writing was affected by emerging new industry and communication technologies. I think this is a good example of how both environments and problems can be inspiring in making art. Stein was interested in character psychology and said that “ways of using attention are individual characters’ reflexes”. Stein’s way of getting over organization society was to use distraction in her writing. This has also been called attentive inattentiveness and constant partial attention. Stein thinks that distractions strengthen the character. Distractions are also interesting choreographically. For her what someone does or says is not as important as the intensity of their being. However I believe those are also linked which is again interesting choreographically. It all seems to be a matter of perspective. Steins writing moves between mechanical and domestic, for example her book Tender Buttons includes mechanical, sexual, emotional and organic meanings. I see this ambiguity, diversity and complexity as part of sensibility. That is interesting in the way Stein writes and I believe it can be experienced in choreography also. If sensibility is profound sensing, intensity of receiving and settling with something it can manifest as finding, inventing and creating diversity/complexity/ambiguity.

What was the use of a whole time to send and not send if there was to be the kind of thing that made that come in.

It would feel a bit raw and unreal to say that the work peace/conditions emerges only in the person/entity themselves. This perspective only takes into account the humans/entity’s responsibility of how they act, react and think. That of course has its own big part in the issue. What it doesn’t consider is differently available resources and knowledge as well as attitudes and atmospheres which are present in different cultures and places. Affectivity and environment’s impact as well as the awareness of their impact are significant. Sara Ahmed says “we are moved by things. And in being moved, we make things”. In other words different conditions and things move us and make us move and that movement is in itself constructing, building and creating. Also thoughts and feelings are movement. Ahmed continues by saying that a thing’s affectivity is influenced by the place where it manifests and the time when it manifests. By Ahmed experiencing something as affective means also being oriented towards everything that is around that affective thing and to the conditions of the things being. Only the conditions of the thing can make the thing itself affective or for example that thing which is behind the affective thing. This is all is again very choreographically inspiring. We are always in some condition and ‘time-space’, borrowing Albert Einstein’s concept. Phenomenologist Maurice Merleau-Ponty says that “thought is constructed by borrowing from the world’s structure”. Experiencing different places and environments multiplicity is important and useful in my opinion. In Merleau-Ponty’s sentence it is interesting to think what this ‘borrowing’ could mean and how it could happen, or is already happening. How could it happen ethically in artistic work? How could it happen without oppression and free from hierarchical structures?

Often I think where the decisions in artistic work are based. Are they (my) aesthetic preferences or opinions, how widely informed if so, which things have influenced them consciously and unconsciously? At this moment it feels interesting to invent creative ways to let the environment affect my decision making. How it happens in practicality is related to developing practising and discerning the skill of sensibility. Sensibility is almost the only force, knowledge and intellect that I am interested in developing in my artistic work at the moment as well as the force which creates good working conditions and peace to working. I think it is quite ethical and although working with sensibility can be challenging I believe it is also rewarding and interesting, it can always be developed and deepened and understood more bodily. It never disappears.

I am never empty when I watch

I am never your emptiness which knocks on doors and limits

I am never emptiness which I watch when I watch 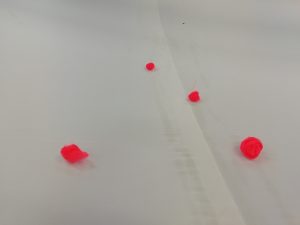