Could you tell a bit about yourself?

A very interesting and challenging question to answer right now! If there’s something like ”liquid identity”, it is exactly what I’m experiencing at this very moment. A bunch of principles and values that used to glue my life together for quite some years now are surely drifting, and as the earth plates of the planet move ever so slightly, there are huge repercussions and consequences to that almost imperceptible motion.

Going straight to the core I guess my life revolves heavily around my work and I’m not satisfied with the medium that the ”performing arts” is or are. I’m trying to change my medium due to a lack of effectivity or inclusivity that I experience within this art form.

What is your background as an artist? What drew you to dance and what other influences / educations do you have?

At the first place I felt attracted to theatre because I felt it was a dangerous place to be, to place oneself in a public territory. So I started with acting. After a couple of years working with a theatre company I moved to Amsterdam since I always felt the ”dance world” a bit more open to hybrids and undefined outcomes, in contrast with the theatre which is pretty much straight forward stereotyped psychology. But I basically jumped right after high-school (with no art education in it whatsoever) to theatre school and later to dance school… so now that I have graduated quite some time ago I feel equally distant to those terms, right as I was before when I stepped into them.

How did you first become interested in materials and inanimate bodies? How has this interest evolved or transformed from the earlier works such as United States up to current creations such as Prins of Networks?

It’s a very curious subject since the interest, as I see it now with some years’ distance, was never the object or the inanimate itself. Primarily my interest lies in non-direct ways of communication, non-direct ways of touch and addressing, moving towards this utopia I have labeled as Au†is†ic Movement. I dream of the performance space as a place for introspection and naturally I started working with objects since they were in between me (the performer) & you (the audience). And I found that by directing all my attention to them I was reaching out towards you and your perceptual body.

I feel as a development, although I find development a tricky word, it went from macro to micro spaces. Before I was more fond of architecture and bigger, wider gestures in that contained performative space. While now I’m more and more keen to research the imperceptible, the smallest part of the biological chain, the insects and the micro-organisms (like algae). 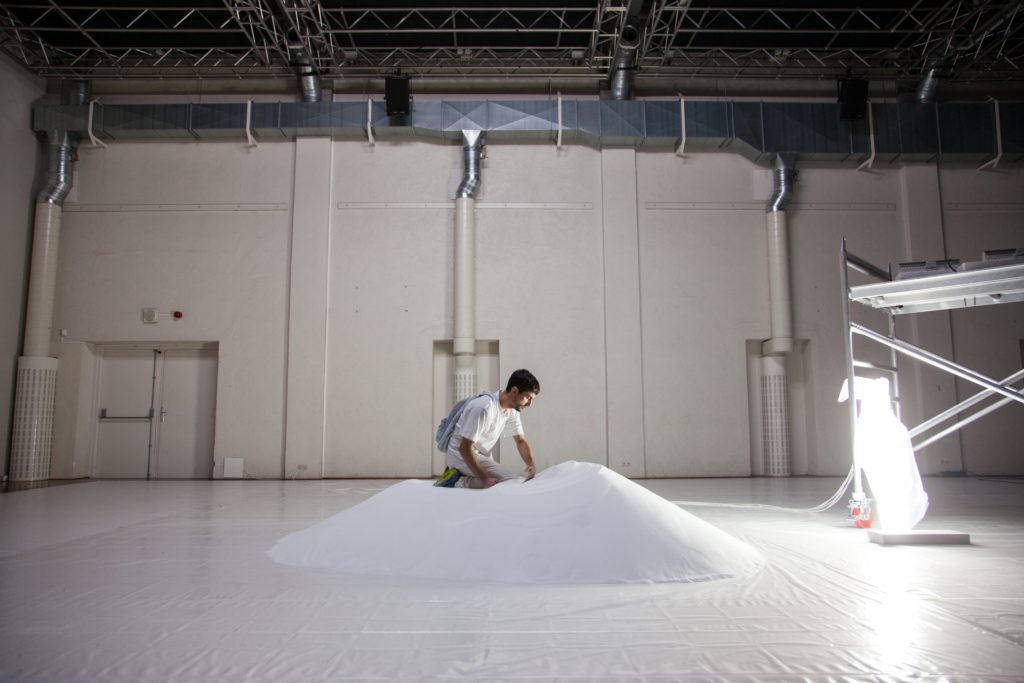 Could you describe your first choice on materials? What makes you to work on specific bodies in each piece?

I would define it very intuitively. I always, as a body, carry desires to encounter or experience certain materialities and textures. And I’m very sharp in not trying to understand that desire, a suspension of disbelief. And usually form and content always match no matter your active effort in trying to link them. Just because we inhabit that space that’s fertile with interpretation, I usually find myself as the role of the suggester or something more updated, so that I’m thinking more and more now I wish to become a ”ghost performer” or achieve a ghost-like presence.

How do you see the role of the human actor in your works and has this changed over time?

I consciously operate trying to equal the human to all the rest of the elements within a live performance but I often experienced that’s not enough. So I really crafted, on the go, a way of being, maybe inspired by this Au†is†ic Movement and moving overall towards this ghost-performer. I like to erase entirely that need for attention we all possessed and appear almost like cancelling my very own humanity, just because I’d like, when I encounter humanity again, to experience it differently or vividly just by having the opposite before. Many audience members have questioned my non-communicative way of performing as negative but I find already the questioning a huge advancement, just for the sake of creating topological irregularities within the ever-so-uniformed-human-centered performance world!

Such as in your works RemoTe sense and Prins of Networks natural elements seem to be important research grounds. Could you tell more about your interest on nature and ecology? What is their relation to the virtual?

I’m quite obsessed with erasing the difference between Natural & Artificial. For me there’s no such a thing as ”separated” from this world as it all ”emanates” so clearly from the life on this planet and beyond! Even the human-made stuff, how could it not be natural as we are a natural force too and whatever we create, no matter how artificial, it intrinsically belongs to, and only to, nature. I don’t seem to comprehend this division so I dive quite fluidly between one and the other, the natural and the virtual. I feel like both are empowering each other and the potential this encounter brings is mind-blowing.

Could you describe the role of sound in your work?

I feel like sound is this utopia I’m aiming at. It does not discriminate bodies-objects, geographical location, social hierarchy and economical implications. It is immediate and can be massively distributed and experienced no matter where in the world you’re standing at. It knows no boundary and yet holds not-identifiable form or shape (it is invisibly audible). It is as massive as natural forces are because it derives from electricity, which derives from water whom we hold responsible for bringing life into the earth. I know no source more direct to a sense of origin of life that sound in itself! And music producers hold this key, they shape electricity which has a huge impact in our lives because its form resembles the one germinal life source we know of.

What kind of role hapticity and affect play in your work?

I think hapticity is definitely the result of the work itself (if there is any) and affects are the knowledge that are the source of it. This thin boundary between what is tangible and what is not is primordial to our existence and this sense of undefinable or in-its-way-to-become is definitely the ultimate wisdom I know of. A state in where nothing is named and yet words are read & seen as images or symbols… in itself, for me, sounds like the perfect place to be.

Rodrigo Sobarzo de Larraechea (CL/NL) studied at the SNDO in Amsterdam and was a resident at the Jan van Eyck Academy in Maastricht. His work seeks to envelope its viewer into visual introspection. Only a deep-seated introspective experience can bring humanity into re-vision, into implosion. Furthermore he possesses a strong interest on subculture and sub-cultural production by means of digital connectivity throughout various internet sites/networks and social media: Au†¡smo. Rodrigo is performing his work Prins of Networks 28.-29.4.2017 in Kiasma, Helsinki.