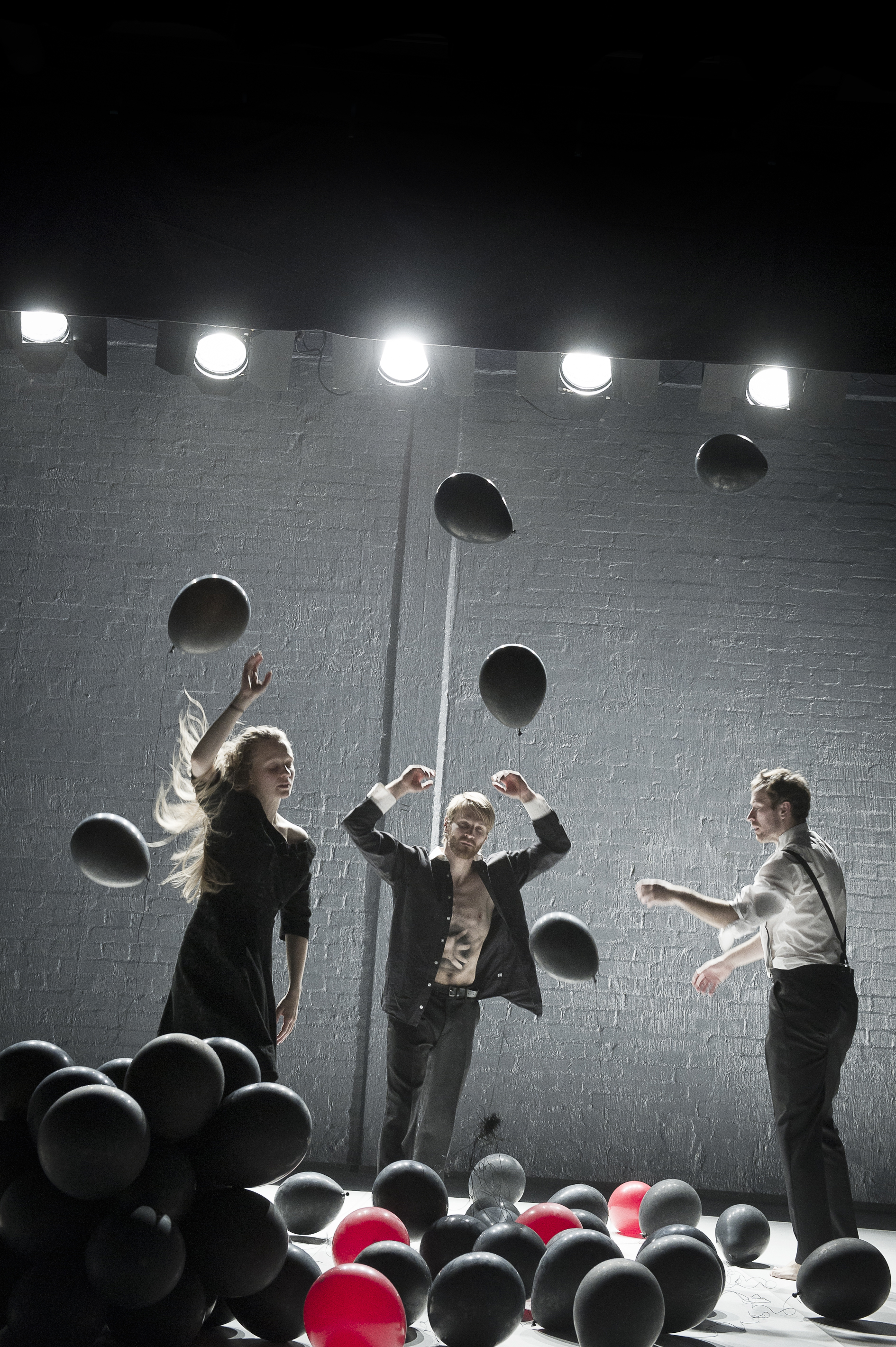 The students of International Performance Research (MA) write about their experiences during Moving in November festival for Liikekieli.com. Nina Khodorivska and Sarah Ibrahim present two different point of views for Maija Hirvanen’s choreography For those who have time.

Non-verbal subversion of binary for those, who think about their time

The style of the performance is minimalistic. Only two colours – black curtain as a background, walls and ceiling, and white floor. Only three types of movement – one for each performer. The first female comes, in black vintage dress and with white bead in her hand. She dances (actually, trembles) fear of death and other things, as she kindly informs. So, her movement pattern is trembling, and she keeps it till the end of the show.

The questions come to my mind, inspired by exaggerated seriousness of performer and dance that is out of any style. Is it better to tremble, when you are afraid, than to think or act? To where this pattern of behaviour can lead, if one obediently starts to fear of “worst case scenario”, “acid rain”, “bang, bang, bang” (these are the words the performer shouts), instead of think, for example, about why is it so attractive to become the victim of fear instead of active subject of world history?

The second, the male, performer comes. He is obsessed with productivity, because of which he does not have time for anything: talking, acid rain, eating, sleeping, sex… During his monologue his body lives its own life. It disintegrates: each part of the body moves in its own direction, with its own impulses. Is it his personality that disintegrates, while he thinks he talks about serious motives of his behaviour? As Lacan once wrote, sometimes they think, that they think, but it’s not true (in psychoanalytic paradigm our unconscious leads and controls our thoughts).

The third movement pattern is very simple: the man with black guitar and black balloon comes and stays, then goes away. At some moment he comes again, throws black balloons to the air as the other two performers. This is accompanied by sound of explosions, but it’s not always clear, what explodes – nuclear bombs or fireworks.

At the same time this performance is mocking at minimalism, despite that performance is completely in minimalistic aesthetics. As Buster Keaton, performers never smile (during this performance), but audience sometimes explodes with laughter – so exaggeratedly seriously are some stupid and pathetic actions done. Personally, I am suspicious about minimalism because it pretends to be universal, while there are so many cultures with so many different views of what is universal that the universalism of minimalism seems to be a bit naïve. However, the way in which performers dealt with minimalism seemed to me not naïve, but critical, and I was happy to perceive it (just because I subjectively liked this approach to cognitively fictively mapped world).

The obvious stupidity of the ending of the song leads me to the idea that artists are telling this not seriously. This is not the only solution. Binary ’hurry or dance’ is black-and-white simplification of the multicoloured world. In this optimistic and liberating ending performers keep the same level of seriousness as during the suffering and obsessive part. The ending is open to mocking as well as the whole serious performance was. The composition seems to be describing the problem and giving solution, as if world was binary and there were only problems and solutions, good ways and bad ways. But the style is subverting this binary, as performers keep that pattern of behaviour that provokes audience to mock on what they are doing, in effect – to mock on this binary.

I’d say that there are two frames, of which creators of the performance make fun. The first one is minimalism, the second one is binary. However, they are united by one feature – simplification. And performers are mocking on this simplification. The world is not so simple – but you need to have time to see this. Or better to reformulate the sentence: you need to be open to the world? to yourself? You need to stop thinking about time?

”We think we are in control but we are not.”

The performance seemed to present a literal exemplification of an audience losing control, which it had the illusion of having before walking into the performance space.

We think we are in control of our time, having scheduled in this specific performance to bring ourselves to attend. A visual birds-eye view of each, yet to be audience member, standing in the reception area before the piece commences, and then walking into the space, announces the control we have over our physical bodies. Having read a description that gave each an idea of what this might entail; a hint or a personal association may be present with us, yet we may maintain the readiness to succumb into the realm of the piece. Loss of control can be pleasurable, and if the intellect is blocked then perhaps the sensory may receive or vice versa or both.

As the performance begins, we lose control to what the piece and performers wish to become; this certainly applies to any performance we attend for the first time. But here, the notions of having time, taking one’s time, passing time, manifest within the performance itself and I find myself seated amongst the audience watching a piece that fails to work together as one, aside from the color consistency of the black balloons, and performers entering and exiting from the same vicinity; we ”who have time”, are watching a fragmentation that perhaps desired to become a piece, but only hinges on hints of that desire.

The loss of control in time transforms into a questioning of whether the performers are taking pleasure in, or have planned for, this heightened confusion on the audience’s part, as a sense of dissatisfaction manifests, towards having had the time. When the third performer appears, fully taking his time in unbuttoning his black, white collared shirt, a loss of control in terms of an imbalance in power, between performer and spectator, pokes at a sense of resentment.

From the point of the audience is seated onwards, the performers proceed to carry out what shortly commences to feel like solely their own acts, as their respective presence in the space is diminished which contradicts with their announced eye-contact with the audience at several times. A lack of connection between the ”acts” is significant and perhaps even as far as in between the detached performers themselves. We end up with a fragmentation stemming from the performers that does not serve the piece which may wish to communicate, but remains stagnant and divided.

A woman in a black dress dances her ”fear of death and other things”.

My attempt to focus on her trembling body shaking with or from the beads and the initiation of sound from a belching quality of movement is halted when she attempts to communicate in words. She screams out: money, worst-case scenario and acid rain.

Death carries time, pulls time, holds time, signals it where to move by tapping on its belly, points a finger for where it is to look. Death rides on time’s back. Time claps. Music. Time carries death. Time rests its head on death. Time lifts death upside down. Death pulls time’s arm to stand side by side, death charges the movements of time.

”I don’t have time for talking. Cut the talk, just do it. Just move it.” Perhaps there is merit for having just done it.

Sarah Ibrahim
Studied art and film and is now doing her masters in performance research.

Read also what Armanc Yildiz and Maria Prokhorova write about For Those Who Have Time.