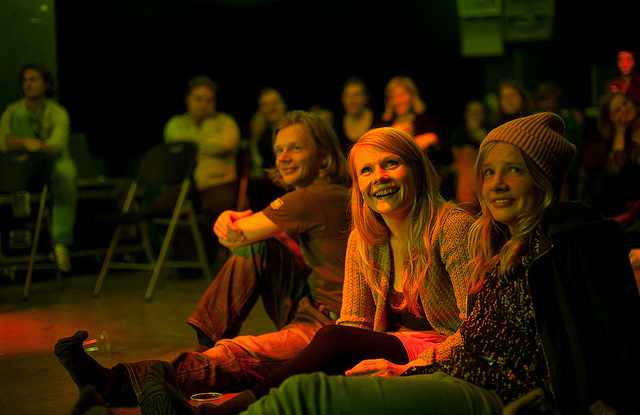 Finnish performers (in alphabetical order) Ville Ahonen, Laura Birn, Anna-Mari Karvonen, Anni Puolakka, Ville Seppänen, Heidi Soidinsalo and Masi Tiitta walked in front of the spectators in the gray concrete post-industrial space at Ääniwalli. This is what they had to say, with broad smiles on their faces: there is not going to be a performance, but we ask you to remain in this space for ninety minutes, which is the pre-announced duration of the show.

The potentially exciting thing was that the performers shrunk themselves into being a blank reflecting material, which responded to the spectators’ initiatives only with a vagueness, which gave an impression of a pose. Some audience members suggested intellectual, philosophical or absurdist topics. The performers declined any invitation to discussion, be it as participants or moderators.

We really had to resort to our inner resources. More predictably than interestingly, the mass of people produced a wish for togetherness, for everyone getting involved in something, anything. Half-hearted attempts were made toward children’s games or simple dance moves. At the back of my mind the non-event produced more a fleeting shrug than a thought about the respective responsibilities of paid performers versus paying customers.

Vibes, a performance staged as part of the Baltic Circle festival in Helsinki, was a work by a group of seven Finnish artists in their thirties, who come from backgrouds in different art forms. It was presented on the opening night of the festival at Ääniwalli club in Vallila.

The audience was free to stand or take chairs to sit in the space. In the very beginning, the performers in front of the empty stage stated that ”there’s no performance” and ”so, no rules”. Then the space and time was open for anything to happen. After 90 minutes they announced the time was over.

Even if the performance group – who are talented, competent professionals in their own fields – asked what the audience would like to do, they were not really interested in the responses. When members of the audience asked for something to drink, for music, for the use of the fog machine again and again, or asked them to teach us something, the working group did fulfil the requests, but without it really meaning anything. It was as if they were fulfilling the basic needs of these weird requests, but nothing else. Some audience members wanted to discuss and talk and did, some to stand in rows clapping hands.

Soon it was clear for me that we were in an incestuous vacuum where anything really creative and vibrant will soon die. My focus was not led to what was happening but to how the situation was set up.

In any case, I was neither disappointed nor bored. Why would I be? I participated and witnessed the moment , I saw human beings as a feature within the concept set by the performance group. This concept can be seen everywhere, in us and around us: hanging out without really taking deep responsibility of anything, with a hint of arrogance and unwillingness to truly interact with the people we are with. For me, it’s fear of being transparent, personal, vulnerable and open to truly mixing the discourses. This emperor was not only without clothes, it was hollow. Hollowness and transparency, as I see them, are far from each other.

If this performance was relocated to a mainstream stage, one can imagine that something interesting might happen. In the context of this festival, it was a game inside a small circle: between the performers and the audience, of whom the majority were people who were involved in the contemporary theatre and dance scene and who, therefore know each other. I enjoyed using the time spent at this performance to rest after a long day.

The ethics of this kind of performance are also questionable – even if I didn’t pay for my ticket, some people did.

By ”low-energy vibes” I mean that I felt the atmosphere in the performance was egocentric: the performance group were willing to stay back and almost wait to see what we would do for them, even if it looked, superficially, as if the opposite was the case. Vibes was a game echoing the unused potential and vitality which often occur in our everyday lives.

The writer is an independent performing arts professional: director, producer and writer. Her passion is in observing movement in all its dimensions, e.g. in physical theatre and contemporary dance but also outside art context in conciousness and in the rich fabric of everyday life.