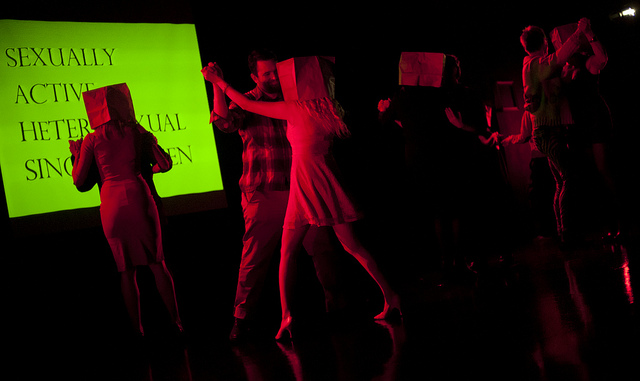 Icelandic Kviss Búmm Bang call themselves the extended life performance group. Their mission is to see beyond the social structures and normality. The Finnish edition of their Gala – A Celebration of Minority Groups, seen in Baltic Circle festival, is my first time with them.

Kviss Búmm Bang take us methaphorically by the hand and invite us to explore our own identities as parts of different groups. At the same time we get to see how some of the groups we Finns take for granted are seen from the outside.

This cavalcade of minorities starts with something rather unexpected, a Roma woman in full ethnic costume singing, not the traditional music, not even tango, but some sort of death metal, with smoke and strobe effects. I’m intrigued. Later we meet some other not so obvious minorities, like sexually active heterosexual single women hiding their identities with paper bags. This one irritates me: we’re allowed to ask questions, but don’t really get any answers.

The humorous vibe of the show is entertaining; the minorities are portrayed with an ironic smirk and a playful attitude. But it’s the discussions, the little chores given by the performers, that I find most interesting. In small groups of strangers, we’re asked to find out what is the group we all belong to, no matter how small or specific. I would have liked to learn a bit more about this.

Suddenly the tone gets darker. We’re shown a picture of Jasmin, who we’re supposed to define. That’s hard and later we find out that it’s actually very hard for others as well, not being able to label this person’s gender. And just when we’re finally thinking we’ve found that one individual that doesn’t belong to any group, one is given.

The performance is very accepting: it’s okay to feel different, but there’s probably someone like you somewhere anyway. I find its non-provocative attitude gentle and welcoming. However, I find myself asking: And then? What am I supposed to do with this experience? Not every show has to haunt you, but the next morning this one’s almost already gone.