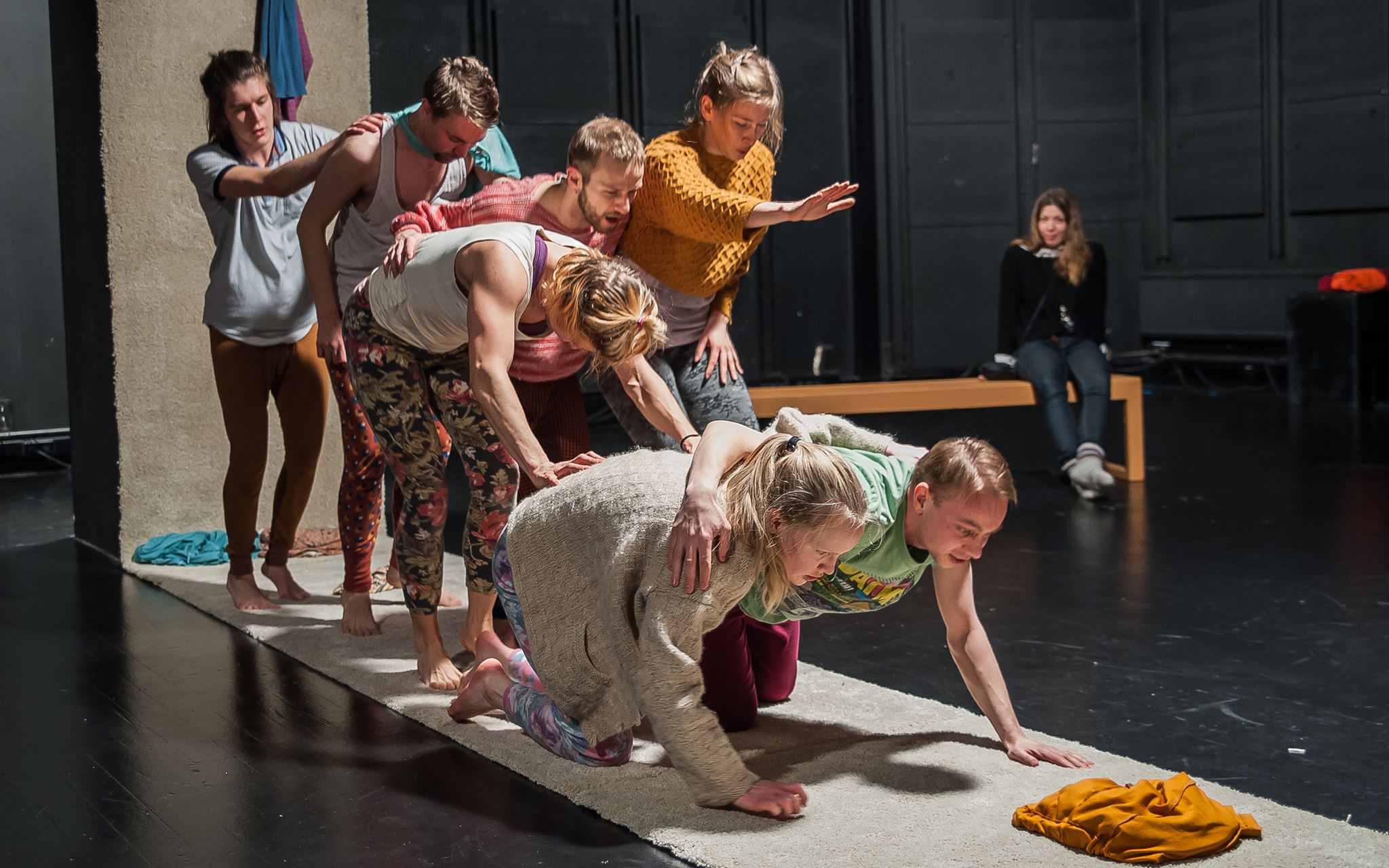 Welcome to visit corporeal home!… Sounds weird?… Not for somebody, who deals in every day life with the awereness, that our connection with this world is corporeal.

Laura Lehtinen’s new piece ”Corpus Domesticus” is about personal history and experiences of one’s own body. It tries to visualize the feeling of corporeal closeness and distance. It questions how to communicate something to another and with each other, remaining open with the possibility of sharing and imitating.

In a black box studio I see the certain conventional home attributes desinged inside of a rectangular-shaped space in the middle of the stage: beige carpiting on the floor, which continues on the walls all the way up to the ceiling; some garments hanging on the sides. Homy Ikea-style round lamps mixed with disco balls – the attribute of the nightclub culture of ”being social and having fun”.

The audience is seated on the benches in the circle. The performers walk, leap, run, jump crossing the inside circle formed by the benches as well as moving behind the audience’s backs. ”Homy set desing” and the space around becomes something that the dancers Seidi Haarla, Simeoni Juoperi, Marja Koponen, Viljami Lehtonen and Katja Sallinen investigate and master with their original movements.

The changing closness and distance between the performers and me, my spectator’s democratic choice whom to follow around and my bench trembling from the performers’ stamping: this is how ”Corpus Domesticus” drags you in just at the moment it starts and keeps you an active follower until the very end.

In this piece the choreographer uses the movement material not only from the trained dancers’ bodies but also from other project’s participants Ina Aaltojärvi (sound design), Viljami Lehtonen (sound design), Immanuel Pax (light design), Annina Nevantaus (set and costume design), Juho Gröndahl (dramaturgy). They smoothly show up in the common action the way that only a very attentive audience would notice, for example, the unattended light and sound boards. One can question such integration of ”professional” and ”non-professional” performers on the stage. It is, first of all, the power of performer’s presence on the stage that I personally question, which still comes as a trained skill from exceptional performing experience and defines a lot the degree of performer’s ”professionalism”. However, in ”Corpus Domestic” the involvement of the designers into the stage action becomes a clear choreographic choice. Laura Lehtinen’s choreographer’s interest goes beyond the trained physical virtuosity and manifests within the concept of corporeal home the movement of a different quality as well.

Surprisingly, I find the culmination of the piece in Viljami Lehtonen’s solo. This solo is not the most dynamic part in the performance’s development but the intensity of my spectator’s perception culminates in it. Following after an intimate search for a contact in duets and a playful group interaction before that, the solo itself becomes a mission to visit own corporeal home. Through shaking, bouncing, swaying and rocking, accompanied with kind of trance music, the dance looks like a ritual, bringing the performer to a state of hypnotism and gathering the energy around somewhere deep-deep inside.

Later with the same movement quality as shaking, rocking, swaying and bouncing each of the performer will find oneself in own light spot in the outer circle behind the benches. The long-lasting action provokes my curiosity about transformations happening to each of the performer in those ceremonial solos and, just like that, passively sitting on the bench, I guess, I am visiting others’ corporeal homes. I recognise the intensity of my involvement when the exhausted performer arrives into a different state of awareness. As well as I drop out of a certain concentrated flow if the performer loses a link to the action. Not all of them arrived…

The bare lightning amplifies exhaustion and sweat of the bodies, but the following playful interaction between the performers eases the tension. It all ends up in the figure of fun together with the pregnant coreographer, and I can’t help but notice, how remarkably the pregnancy complements the whole concept of corporeal home.