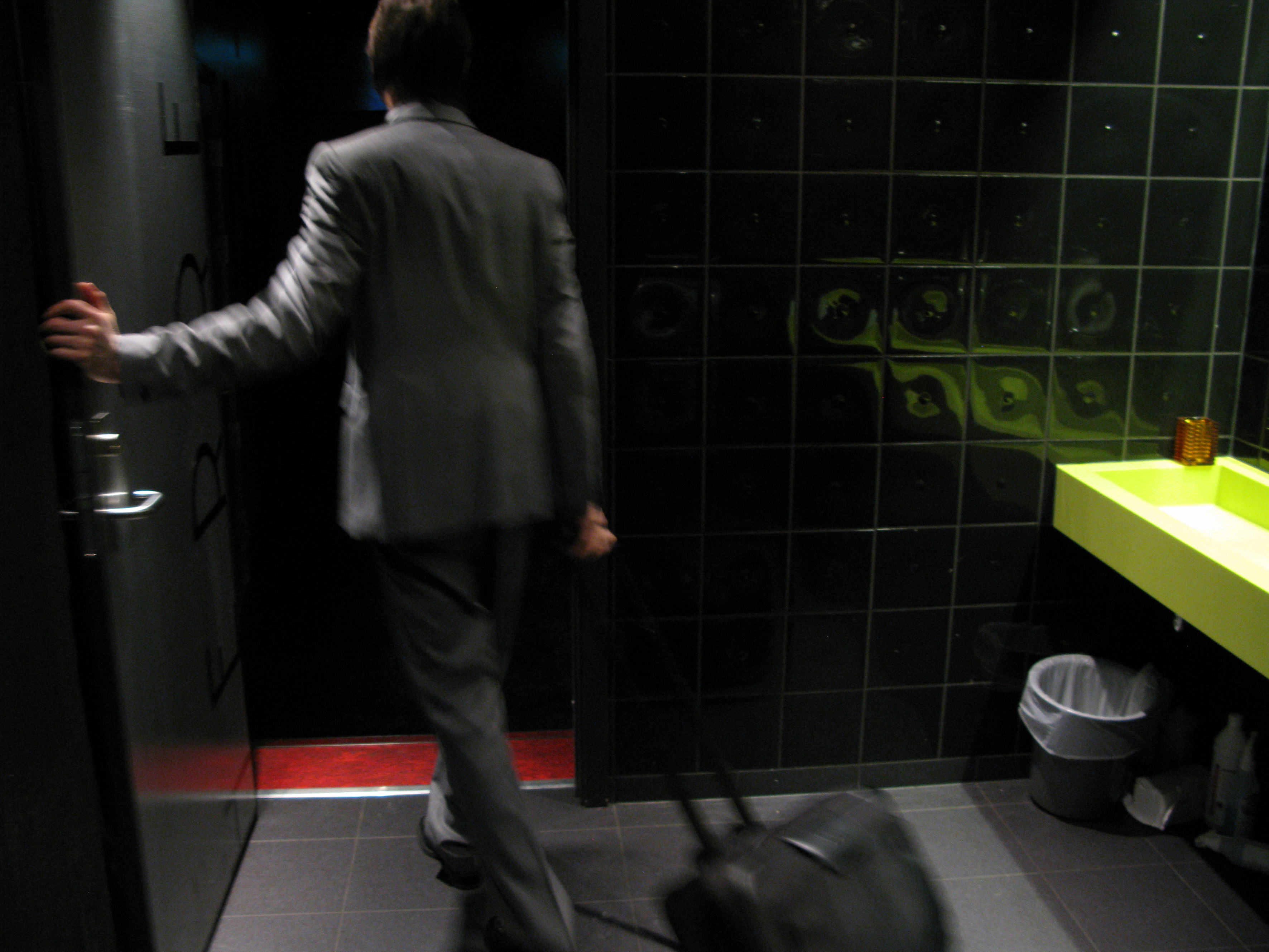 The students of International Performance Research (MA) write about their experiences during Baltic Circle International Theatre Festival for Liikekieli.com. Feel free to comment, question and give some feedback on Sarah Ibrahim’s review of Field Works Hotel by Heine Avdal and Yukiko Shinozaki.

I am on the search for clues left for me unlike any hotel room where one does not expect to find things personalized for them. Solipsism. Childlike. I am very pleased when I find a “Dear Sarah” with an unidentifiable drawing in the garbage by the closet.

Involuntary memory is triggered by entering a room that is unfamiliar, after establishing that there are no others present, and after exploring the little notes that hang on the plastic flowers, closet handle, hangers and toilet paper; Perfect, Take me, Probably, Please, I notice the television screen playing a welcome advertisement to Hotel Arthur where “3000 rooms are waiting for me…ready to engage.” I am now in 315 and seated in an armchair. “Perhaps the immobility of the things that surround us is forced upon them by our conviction that they are themselves, and not anything else, and by the immobility of our conceptions of them.” Involuntary memory set to motion by a foreign space. I think of Marcel Proust.

“My body… Its memory, the composite memory of its ribs, knees, and shoulder-blades offered it a whole series of rooms in which it had at one time or another slept; while the unseen walls kept changing, adapting themselves to the shape of each successive room that it remembered.” The light pink shimmering walls, the possibility of them changing into rooms I’ve been, in an attempt to familiarize, or transcend a linear notion of time.

A man enters a hotel room, the screen shows, it is exactly the same as the one I am in now, immediately I make the assumption that it was a pre-recording. I watch him. I question if it was in fact the same room, reinforcing traces, of where his body heat resonated, what he breathed on and how he moved. I am not concerned with how long ago it was. Romantic meanderings of thought, triggered by a sterile environment; a screen and a fleshly walked into hotel room. Perhaps it is the notion of the trace and the possibility of memory that create this romanticism.

Sounds resonate from varying origins around the room. Water running from the bathroom at one point where he has disappeared from the screen, I go in, and turn on the water, adding to the recorded sound. I trace the sources, others not signaling specific actions, but more of soundtracks to resonance. I trace them behind the curtains and under the bed. I am satisfied now that I have located the sources, I am acquainted with the room. I follow his actions. I follow what was past in present. Adding to his past, or reaching out for it in attempting to run parallel to it.

Now, I appear on the screen, seated on the bed, I fade out. He appears in a another location in the room and fades out, this pattern repeats itself as we move. I locate the camera. Then I go back to him, I try to maintain close proximity, and I think I am following him; a welcoming of traces in the sense of the past. After laying on the bed facing one another and taking his lead in playing with pillows. I begin to realize that he follows me; past reaching to future since present is where I am. The notion of time becomes circular.

What I had conceived as a pre-recording signifying a past trace – placing me in present tense, becomes future for the past that follows present. I am tracking tenses but as we interact such states of time diminish and notions of past and future become fully present. At first he maintains agency, then I, we each accept. We are gradually unfolding through a play. This hotel room is present now with both of us, seemingly through a virtual mediation as a result of the screen.

Yet, although visibly it is virtual, the notion of the physical trace has been at play for a while now that the divide between virtual and real is no longer there, perhaps as a result of the simultaneity of our actions, along with this transition in realizing tenses, past, present, future, and my evolving conceptions of what is when. Where he physically is, is no longer a concern by now, I am caught up in being with him; the body’s instant impulse in seeking other bodies. Both our traces exist in present. I go to the phone to see if perhaps I can channel through an aurality to our presence but he picks up the phone after I place mine down then mine rings.

“Hello.” Echo of my voice in my room. He does not speak but is there. An aural experience to establish presence. But it is no longer about an experience of another, becoming whole through fragmented divisions of visual (screen) and aural (sounds and telephone). The notion of the trace is what commenced in informing our modes of presence, then we transition on the screen. Him, I follow, Me, he follows, the shifts in the initiations of movements creates the presence across varying conceptions of time.

I am thanked in text on the screen and said goodbye to, sincerely by Field Works Hotel. It takes me some time to eventually agree to leave. And I see him as I close my door, at the end of the corridor dragging his suitcase, in his suit. For an instance it is a haze, as though it took a moment to exit this state of variance I was in. I follow him, he hides somewhere. I take two steps up the stairs, I see him and he shifts positions to hide further. My encounter does not wish to face me, that’s when I decide it is time to leave.

The quoted text comes from “Remembrance of Things Past: Swann’s Way” by Marcel Proust.

Sarah Ibrahim
Studied art and film and is now doing her masters in performance research.