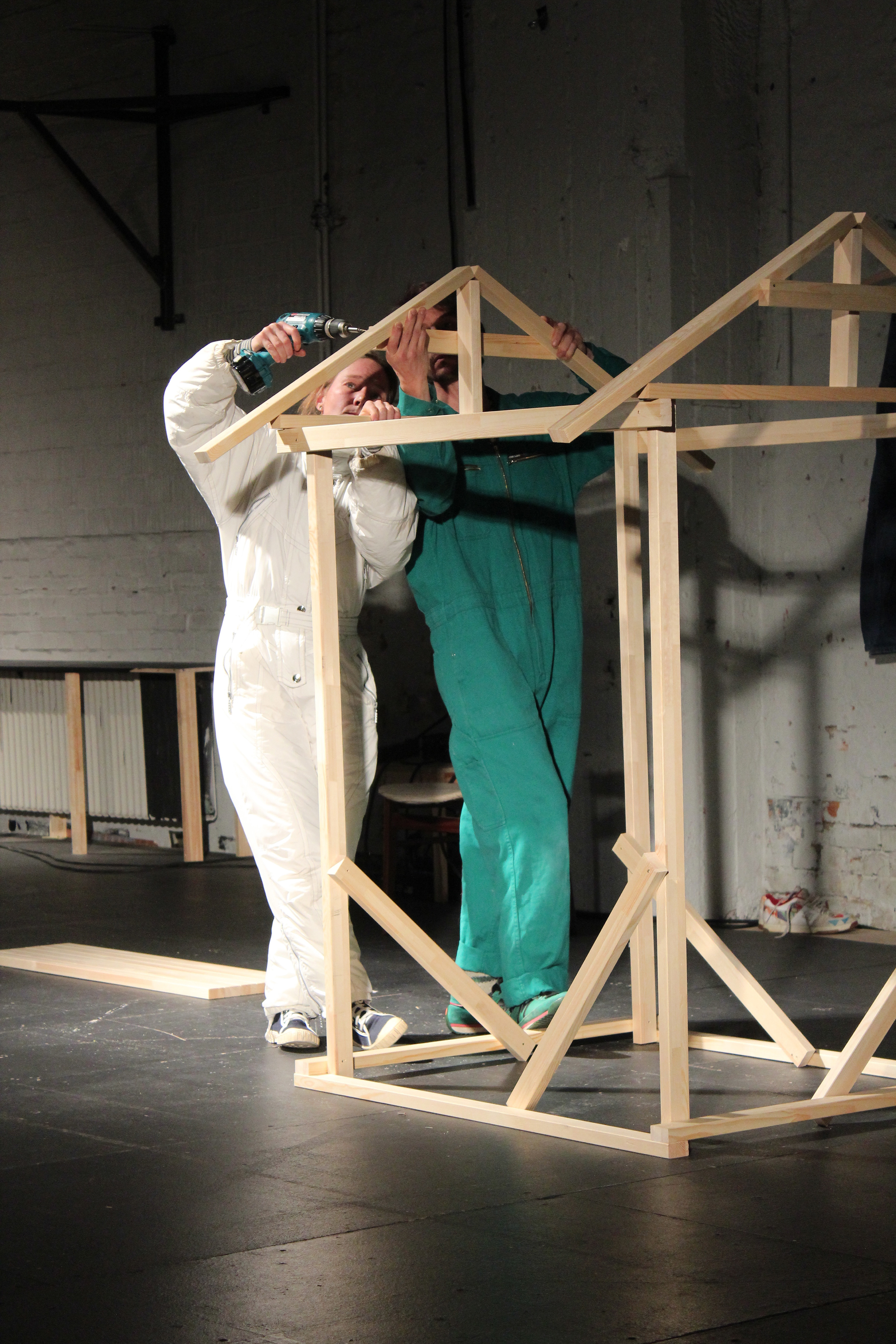 The students of International Performance Research (MA) write about their experiences during Baltic Circle International Theatre Festival for Liikekieli.com. Feel free to comment, question and give some feedback on Viola Karungi’s review of It seems a good place to build a house by Kaja Kann and Juha Valkeapää.

Oooh my! I don’t remember the last time I watched a show in an incredibly relaxed mood, with an unfading smile of awe, with a gaze of delight, and the ability to control my breath. I felt this way as I watched ‘It Seems a Good Place to Build a House’ at CIRKO on the evening of 7th Nov 2012.

This title stems as much from the real plug of this performance’s realism production, as a house is actually build on stage. A persuasive Estonian woman and a lackluster Finnish man dream of building a house ‘for safety’ and; but also because it is ‘prestigious’ to build one in their respective cultures. They resolve to do it together.

Finally when the house is built, it is big enough for only one of them-the woman; so the man must squeeze in at least to share a bed and a meal with her. It becomes even more complicated when the woman decides to host guests, and as the house is not big enough, the man promises to build for her a bigger house, which he does. A light comedy, about unreciprocated love which the Estonian woman labours hard to extort out of the rather insensitive Finnish man. The story unfolds with well controlled ease, a gentle tone, yet a perfect pace so that you don’t feel drably. Dimensional perspectives of the need/desire to build a house, the anxiety during the process, the (dis)satisfaction of the achievement, and the resolution to have a bigger house are explored through the intricate yet simple plot.

The first impression of a construction site is seen at the start through the scattered stage set:  a kitchen right stage down, a wooden seat and open ‘changing room’ with overalls hanging off a cliff somewhat  upstage centre, a props corner upstage left,  a guitar, chair , microphone, a lights stand and hoofers are all placed on the stage. And I must admit that sometimes I had difficulty in moving my eyes from one spot to another whenever action happened at once. So it’s possible that one could have missed one significant bit along the way.

Once they agree to build the house together, the man goes off and returns with a chunk of curved wood. He builds the foundation of the house while the woman cooks soup in the kitchen – gender roles at play. At the same time, this binary causes conflict especially because the woman feels neglected hence ‘interrogating’ the man.

The line ‘If we ever part that will break my heart’ which he sings catalyzes the conflict. But how do they build a house together amidst this conflict? She builds the walls as he holds the pieces of wood and supports her, they roof the house together and then I almost see their lips meet, but they never. Seldom whispers of caution. Finally when the house is finished, they furnish it with a carpet, chair, television and thereafter, they ‘bear a child.’ A creative way of playing with one prop for several roles and an economical one at that, transforming the house as well into a studio, as the woman assumes postures for a model while the man playes the photographer, and later on with the silhouette was an impressive illusion.

The director did just to explore various production techniques such as; storytelling, use of the projector to translate the non-English stories, flashbacks, soliloquys, monologues and dialogues, and a recorded voice off a mobile phone. Letting the woman to ‘control’ the lights and the man to switch the projector on and off (although at one point he forgot to switch it on in time) rendered the actors in charge of their life on stage. They also changed costumes as the audience looked on. There was an element of the Samuel Beckett style, of distancing the actors by their use of commentaries alongside dialogue.

However obvious it was that the woman always had an inviting and sexy look, while the man played ‘hard to get,’ one could tell that the seductive woman was his ultimate goal. True to the word, finally the chemistry worked. Why else would he build for her (read: for them) a bigger house? And theeeennn she was able to host her guests-the audience and treat them to cabbage soup!