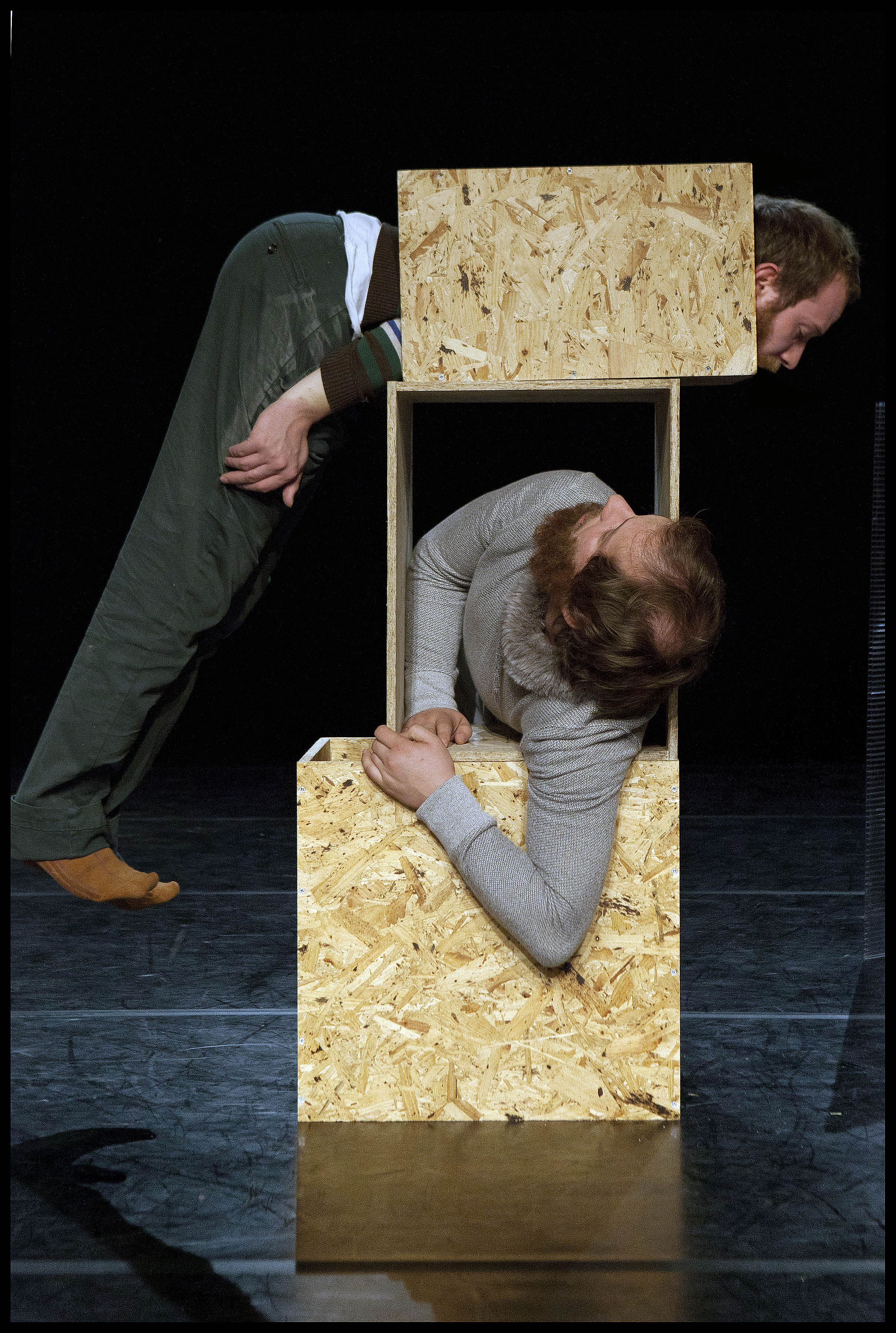 The students of International Performance Research (MA) write about their experiences during Baltic Circle International Theatre Festival for Liikekieli.com. Feel free to comment, question and give some feedback on Nina Khodorivska’s review of Jake and Pete’s Reconciliation Attempt for the Disputes from the Past.

Competition as a Play Without Winners

Two men with big beards enter the black cabinet with wooden boxes/blocks/tubes, sit together and suddenly start yelling. The competition begins – and the performance begins. Each tries to yell louder than the other. Combined with slow cyclical movement this competitive yelling gains the connotation of eternity. I perceive the act as symbol of permanent competition between brothers, that can from time to time become invisible for conscious, but constantly takes place at deeper levels of personalities.

The next act starts – competition again. But this time – more playful and creative: different parts of bodies of two men trap into wooden blocks so that they turn out to be in unusual positions. Brothers build a construction together, using their whole bodies, not only hands. They look at each other all the time, checking, if the other one works better. Finally a construction is built from the chaos of blocks, so the competitive play has creative result.

Then circular running – who will be the first? And how is it possible to be the first, if the movement is cyclic? This running leads me to association with contemporary city rush. This connotation transforms competition between biological brothers into competition of everybody with everybody as with brothers and fathers, created through psychological mechanism of projecting previous experiences of communication on today’s partners. Thus the performance’s topic broadens from family relations to relations with people in the whole variety of social interactions.

One of the brothers builds a huge pyramid, imprisoning the body of his companion in this construction. When he climbs on the top, the music starts, and he sings. The song is nice and melodic statement of friendship. The imprisoned one joins singing. The pyramid gets destroyed. Competition continues again, accompanied by patriotic Flemish song, performed a capella. It begins with two voices and two wooden blocks, then the recorded voices of brothers are added, and there are 3, 4, 5 and even 6 voices in this virtual-real choir. Two huge constructions are finally built, very stable despite of visual instability. The performance ends after a small dialogue, during which it turns out that it was not clear for one of the brothers all the time, that they were playing, not fighting.

The bodies of performers are covered with casual clothes. There is no music during most time of the performance. Occasional non-systematised sounds of wooden boxes, making contact with each other and the floor, are the background for short and long songs, that performers sing from time to time. Performers do not use all the expressive potential of human body. They use their muscles in that minimum amount that is enough to put their bodies in awkward positions on, through and between props, but not to create some special bodily expressions or dance style. Two serious and sweet dwarfs with big beards playing their specific game that is in some way understandable for humans and connects humans with archetypes of their collective unconscious.

Jackob and Pieter present different points of view on competition. It leads to creation, it’s a fight, it’s a game. Flamish song brings a connotation of social (and even political) competition to the final act of the performance. If the competition between brothers can be finally perceived as just an amusing play where any victory is considered to be true – should we perceive political competition, competition of points of view and discourses, as amusing play, where it doesn’t matter, who wins?

Performance is succinct and to the point – and this is it’s strong side. There could have been dance-trained bodies there, or links to variety of topics of family relations or of competition in nowadays world – but then it would be another performance.